History more than hobby for author/musician

Award-winning historian, author and musician Mark Lee Gardner doesn’t just sent in a library sifting through old archive materials when researching one of his nonfiction books on the old west.

The Cascade resident prefers to hit the road and see the land, surroundings and walk the trails where the subject of his books once traveled.

“I do original research and visit the historic sites,” he said. “I like to be on the ground where these historic events occurred.”

New technology and the Internet come in handy these days. Gardner is able to pull up old newspaper pages without having to spend hours in a library. Nevertheless, he still enjoys getting out in the field and getting his hands dirty.

Gardner’s previous books include “To Hell on a Fast Horse: The Untold Story of Billy the Kid and Pat Garrett” and “Shot All To Hell: Jesse James, the Northfield Raid, and the Wild West’s Greatest Escape” both published by HarperCollins.

The history buff has appeared on the History Channel, PBS American Experience, ABC World News, AMC, the Travel Channel, American Heroes Channel, Encore Westerns Channel, Book TV, NPR’s All Things Considered, Irish National Radio, and BBC Radio. He writes for both popular and scholarly audiences, having published with numerous periodicals and websites such as The Daily Beast, American Heritage, Wild West, American Cowboy, True West, New Mexico Magazine and Journal of the West.  His op-eds have appeared in the Los Angeles Times and on FoxNews.com.

Gardner’s love for history comes from his parents, who were both interested in history and collecting antiques. He said his father always made a point to visit historic spots on family trips, like forts, battlefields and old houses.

While in high school, Gardner’s first “real job,” he said, was working at Bent’s Old Fort in La Junta. He worked three summers there. In college, he worked his summer vacations at Harpers Ferry, W.Va.

Gardner was excited about working historic sites, being a part of the living history, not to mention wearing costumes.

“You’re so immersed into history, that time period and that site,” he said.

After college, Gardner eventually worked as director of the Bloom and Baca Houses, which are part of the Trinidad History Museum’s complex in Trinidad. It was later at a symposium that he met his wife-to-be, Katherine. The couple married and eventually relocated to the house Katherine grew up in in Cascade. Gardner started writing freelance and took care of the couple’s children Christiana and Vance, who are now 27 and 16, respectively.

Gardner was born and raised in Missouri, Jesse James country, that’s why he’s partial to his book about James. Research entailed Gardner revisiting places he once went to as a child, including the house in St. Joseph where James died.

“As kids, we grew up with Jesse James as a hero,” Gardner said. “We played Jesse James on the playground in school. Jesse James is kind of in my blood.”

National Geographic History magazine sought out Gardner to write a piece on James. It will print in March of 2019.

Writing a book is usually a three-year project for Gardner with travel, research and writing.

On the plus side, Gardner is often accompanied by family, as he tries to combine family trips with research.

He is currently researching famed Lakota leaders Crazy Horse and Sitting Bull for a dual biography to be published by William Morrow/HarperCollins.

Research on the two Lakota leaders took Gardner to the Northern Plains. Tackling such a subject comes with a little downside, according to Gardner. It can get really depressing, he said, being that Crazy Horse and Sitting Bull were murdered.

While researching a historical society in North Dakota, Gardner stumbled upon a few blood-stained photos that had been taken off Sitting Bull’s body by a surgeon.

“That whole tragedy became so real,” Gardner said. “Holding these photos that come off Sitting Bull’s body was overwhelming.”

Gardner’s love for history includes historical music. While in college, he picked up the banjo. He was a fan of country and bluegrass music and that goes hand-in-hand with historical music.

Gardner has performed the historic music of the American west for more than 30 years.  As a “living history” educator, he has re-created the authentic music of the Santa Fe Trail, the battlefields of the Civil War, the cow camps of the Southwest and old west outlaws such as Billy the Kid and Jesse James.

Gardner often performs with music historian and multi-instrumentalist Rex Rideout, and together they have produced several music CDs, including the award-winning “Jack Thorp’s Songs of the Cowboys” for the Museum of New Mexico Press.

Gardner and his son Vance perform together at three or four events a year at Rockledge Ranch.

“I’m trying to impart my interest in the music past on him,” Gardner said. “I really enjoy playing with my son. That’s been a real thrill.”

A recent project Gardner is excited about is the release of a graphic novel adaptation of “All Shot To Hell.” The book is available at Barnes & Noble and on numerous websites online.

“It’s so exciting to see my story turned into another medium,” Gardner said.

For more on Gardner, visit www.songofthewest.com. 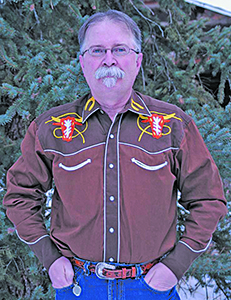 Gardner has written books about Billy the Kid and Jesse James.

The cover of the graphic novel released in September.