Posted on January 30, 2019 by Rhonda Wray Leave a comment 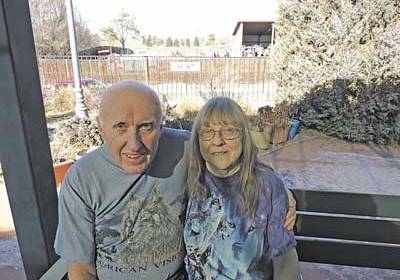 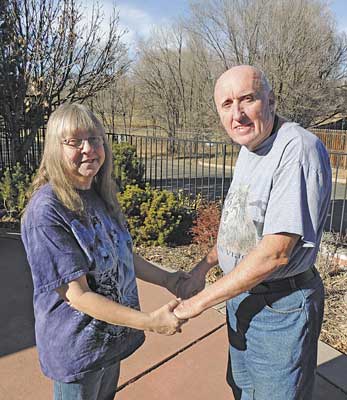 Susan Evans and Freeman Simmons are frequent visitors to the Colorado Springs Senior Center. The two became friends two years ago during one of the center’s day trips.

“That’s how we met,” Freeman said.

The pair enjoyed keeping each other company during those trips, in particular the ones to Camp Shady Brook. There, the Freeman and Susan enjoyed hiking together, playing games and eating together in the cafeteria.

“We were getting along great,” Freeman said. “I thought it was past time to ask her out. It took a while to get up the courage.”

He asked her out this past September, and the two have been a couple ever since.
“Well, I knew him for two years already,” Susan said. “We were friends. We had liked each other and got along good. And we liked the same things, so I said yes.”

As the friendship blossomed, attraction grew between the two. Freeman said he felt moved to finally ask Susan out because, “… just her attitude and the fact that she’s always in those wolf outfits, and she enjoys the same things I enjoy.” (Editor’s note: Susan and Freeman were wearing wolf T-shirts during our interview.)

Freeman worked as a registered nurse before retiring around five years ago. He moved to Colorado Springs in 1990 and had a live-in partner a majority of the time while working at Penrose Hospital.

“I got lonely pretty quickly, because my partner had died just a little while after I retired,” Freeman said. “I came (to the senior center) mostly to keep the relatives off back who said, ‘You should be getting out instead of watching TV all the time.’”

Susan, a housewife and mother of two children, was married for 37 years before her husband passed away around five years ago. She was living in New York, but her daughter Brianne encouraged her to come to Colorado.

“I hadn’t done much of anything. I was lonely. I just had my daughter and grandson. They moved away. I all had was the senior center,” Susan said. “I was debating whether to move where they moved or stay. When (Freeman) asked me out, that made up mind that I was going to stay here. I had a reason to stay.”

Neither Freeman nor Susan were sure they’d ever find love again. It’s been a pleasant surprise for both.

“I don’t know if I was content with (not finding love), but I was resigned to it,” Freeman said.

“I never thought I’d find anybody else after my husband. I’m so happy with him,” Susan said of Freeman. 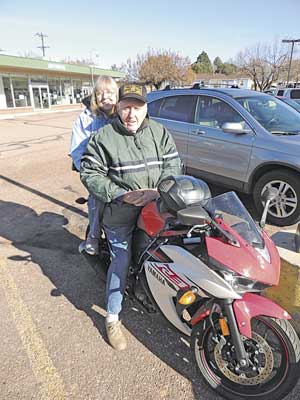 The couple spends a lot of time enjoying day trips including heading to Cheyenne Mountain, Helen Hunt Falls and the Denver Zoo. A lot of those little trips are done on Freeman’s motorcycle. The 67-year-old has been riding motorcycles since he was a teenager.

“I hadn’t ridden a motorcycle but a few times in the 70s. I was really scared when I started riding with him,” Susan said. “The more I ride on it, the more I’m not as scared. We bought each other matching helmets for Christmas!”

And, of course, the two hang out at the senior center several times a month. The couple enjoys participating in the Drums Alive class. Susan and Freeman also took home first and second place at the center’s Halloween costume contest – Susan dressed as a witch and Freeman as Batman. The pair also pitched in to help with the center’s Turkey Trot in November.

On New Year’s Eve, the couple took a big step, as Freeman moved in with Susan.
“We haven’t told everybody yet,” Susan mentioned.

The couple is also talking about marriage. The two have been ring shopping and an engagement could happen soon. Then after Susan turns 65 (and gets on Medicare), the couple plans to wed.

“We like the trips, we like to hike, we love our dogs and we love animals,” Susan said. “We watch a lot of the same movies. Recently, we went to ‘Aquaman’ and we saw ‘Vice’ and ‘Mary Poppins.’”

When it comes to meals at their house, Susan gladly does the cooking.

“I enjoy eating,” Freeman said. “She likes to cook, and I like to eat.”