Posted on November 7, 2019 by Rhonda Wray Leave a comment 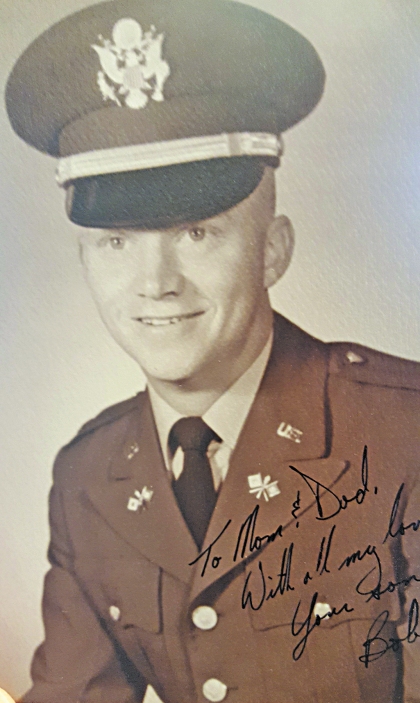 Robert “Bob” Frick is quick to note that he’s no hero, although he served among many.

Yet, when considering the impact his years in the U.S. Army and Army Reserves had on his subsequent career as a teacher, it’s likely his former students and colleagues would disagree.

Originally from Silver Spring, Maryland, Frick enlisted in the Army in 1965 at a time when many young men hoped to avoid being drafted and sent to Vietnam.

“Prior to 1965,” he said, “I was an underachiever. I always tested high, but performed low in school. I felt like I needed to do something to succeed.”

His timing was fortuitous in that, even without a college degree, the Army then accepted applicants for Officer Candidate School. “When everybody was trying to stay out of the Army, here I go, typical, when everybody’s going to the right, I go left. I enlisted,” he said.

In spite of his poor performance in high school, Frick was near the top of his class in leadership in OCS. “The Army’s training model was all hands-on” he said.  “You learn something in the Army then you apply it. It totally changed my life.”

Thus began a nine-year stint of active duty followed by 21 years in the reserves from which he retired as a colonel. Frick was initially stationed in Germany where he “commanded two companies while still a first lieutenant, l looked about 18.”

This was followed by a one-year tour in Vietnam with the 101st Airborne Division. Among other things, he was responsible for setting up communications so the commander on the ground at LZ (Landing Zone) could talk to the people back at Camp Eagle.

After Vietnam, Frick spent three years in Hawaii, where he met his wife, Jeannie, of 46 years.

“I decided I wanted to become a teacher,” Frick said. “When I went into teaching one of the reasons was that I wanted to work with the kids who were like me, who didn’t fit the normal delivery model. When I was in the Army and commanding, I liked working with draftees. They were 17, 18 years old, and they were kids quite often who didn’t fit the system like me. I became a shop teacher largely because I knew that students I would have in shop classes would be ones that were hands-on learners and I loved it.”

With the exception of one year at a Missouri boys ranch, Frick’s teaching career was spent in Colorado Springs School District 11: Holmes Junior High (before it became a middle school), Palmer High School and the district’s Educational Opportunity School. Frick taught shop and computers. He also served as the coach for multiple sports at Holmes and Palmer.

“When I was first hired what they were looking for someone who knew how to discipline youngsters and because I was a veteran from the 101st Airborne and a former captain I was offered the job,” he said. “I liked the kids with the little rough edges. Those are the kids largely I continue to hear from.”

Serving in Vietnam has taken its toll on Frick’s health, but his it hasn’t diminished his love of life. Frick enjoys wood working, metal working, but most of all spending time with his family, particularly his four grandchildren. He doesn’t consider himself a hero but based on what he’s heard from former students that’s debatable. 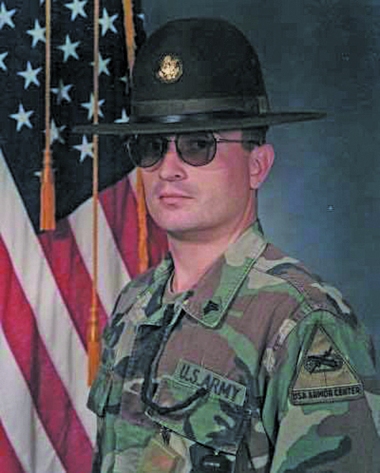 The military life is in Rikki Dee Hall’s blood.

“I come from a military family,” he said. “My great-grandfather, grandfather, my father, all my uncles, my cousins – they’ve all been in the military.”

“I did it all,” he said. “I was a drill sergeant a few times. I jumped out of airplanes like an idiot, and I was a tank commander.”

Hall served in the Gulf War, as well as the invasion of Grenada.

“I had never even heard of the country until I got there,” he said. “They gave us maps from the gas station. We didn’t have any maps. We’re looking at these tourist maps. That was different.”

It’s been nearly 20 years since Hall retired from the Army while stationed at Fort Carson. He doesn’t miss it much these days, however things were different when he first got out.

The original plan was for Hall and his brother Steve to retire from the military at the same time here in Colorado Springs, so they could put together a band. That plan changed when Steve experienced an early exit from the Air Force and moved back home.

Nevertheless, Hall went on to form the VooDoo Hawks, a popular rock/Americana band here in Colorado Springs. Ironically, the founding members were all former military. Whenever there have been lineup changes in the past few decades the band has been around, Hall tries to recruit former or retired military whenever possible.

“I run my band like a military operation. We have a certain ways of doing things, like SOPs (standard operating procedures). Everybody has a duty, something they’re responsible for,” he said. “We make a lot of lists, like they do in the military. We have a laminated piece of paper of what’s needed for a gig and what needs to be in the trailer.”

Hall even wrote the VooDoo Hawks song “Quicksand” while serving in the Gulf War. He sat out with a guitar and a cassette recorder as bombs dropped in Baghdad.

What Hall enjoyed about being in the military was the structure and people pulling together as a team, he said.

“Like every job, there was always a weak link – someone who doesn’t want to be there,” Hall mentioned. “For the most part, everybody in the Army pulled their weight. It’s far different from civilian life.”

There were many takeaways from Hall’s time in the military. Things he still lives by today.

“Always expect the unexpected. All great plans will go to s–t somehow,” he said. “Adapt and overcome. Always try to stay positive. Find the positive in the crappiest situation you come across.” 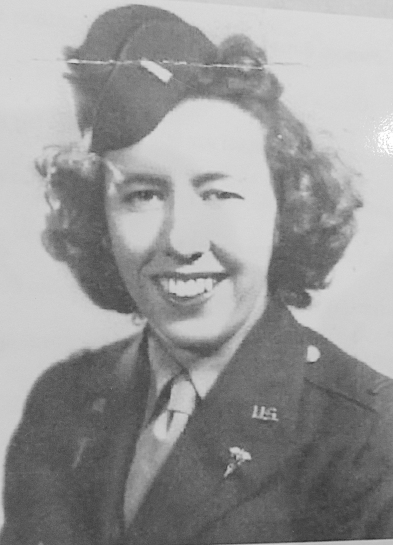 Marilynn Doenges, Lloyd Wooldridge and Charles Woudenberg have a lot in common.

Not only does the trio live at the Summit Glen retirement community, each is in their 90s and, most importantly, they’re all World War II veterans.

“It was about loyalty to the country … a dedication to it,” Lloyd said.

He spent 32 years in the Army Corps of Engineers as a lieutenant, serving in WWII, the Korean War, the Vietnam War and the occupation of Japan. He retired as a lieutenant general.

Initially, Lloyd had an appointment to the Naval Academy, but that didn’t work out and he enlisted in the Army instead.

“I went (to the Naval Academy), took a color blind test and they said, ‘Go home.’ I was color blind,” he said.

Following his time in the military, Lloyd worked different careers overseas and spent 55 years of his life in Japan. He was involved in international trade, international banking and fire and safety engineer design.

Lloyd also became quite the businessman with dealings in Spain, China, Venezuela, England, the Philippines and Australia.

“I’ve had many careers,” he added. 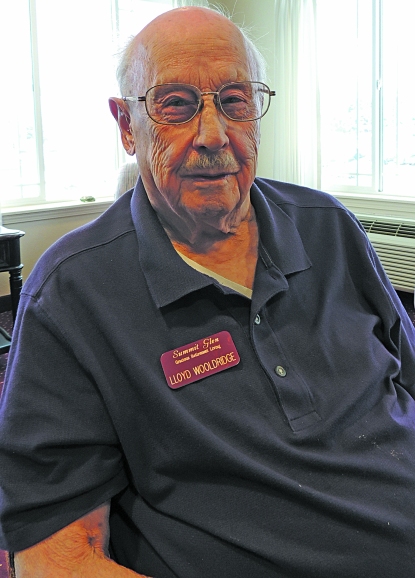 Marilynn was enlisted in the U.S. Army Nurse Corps as a second lieutenant. She was stationed at Ashford General Hospital in White Sulfur Springs, W.Va. There she treated soldiers from the Battle of the Bulge, the last major German offensive campaign on the Western Front during WWII.

Then she got orders to go to Europe.

“We spent eight days traveling across the ocean, zig-zagging to avoid submarines,” Marilynn said. “When we landed, they said, ‘The war is over.’”

Marilynn was one of 500 nurses that were sent to provide relieve to nurses serving in Europe. They were then directed to Northern France, where they waited for a ship to transport them to the Philippines.

“Then we found out the war in the South Pacific was over,” she said. “We set up in an old school in Marseille and took care of the wounded.”

Marilynn left the military a first lieutenant. However, she continued to work as a nurse for the remainder of her career.

“Nursing is a really wonderful profession, always taking care of people in dire circumstances. Taking care of those young men, who were the same age I was, was really a wonderful thing. I liked being able to help them, take care of them and listen to them,” she said. “I had a ward of 100 men in Marseille in a psych ward. I treated soldiers suffering from shell shock or what we know now as Post-Traumatic Stress Disorder (PTSD). I wound up working as a psychiatric nurse.”

Before that, she attended the University of Colorado in Boulder to get her bachelor’s degree. However, she met her husband and left school.

“It took me 20 years to get my bachelor’s degree,” Marilynn laughed.

Later, she would teach at the Beth-El College of Nursing. She also got into publishing and, along with her friends Mary Frances Moorhouse and Alice Geissler-Murr, publishes the Nurse’s Pocket Guide, which can be found for sale online and in stores.

Marilynn, who participated in the Nov. 2 Veterans Day Parade in Colorado Springs, said she didn’t think twice about enlisting back then.

“It was something you did because you had to,” she said.

Charles fought Germans in Italy during WWII with the Tenth Mountain Division out of Colorado. He was enlisted from 1943-1946.

“We had a lot of casualties. There were 1,000 killed in action in our division,” he said. “When we were in combat, we were among friends we knew. It was very hard to see people hurt or killed that had trained with us.”

Charles enlisted at age 18, after watching a PR film about ski troops. He was stationed at Camp Hale just outside of Leadville.

“After seeing all the war pictures, I thought, ‘Boy, if I get in there, I won’t be going out to the pacific,’” he said. “I came out here all by myself. I had never been west of the Delaware River. I did it because we were at war, and it was my turn to go. I didn’t wait to be drafted.”

Charles served as a platoon sergeant in a weapons platoon. He was on the front lines, and that was tough to contend with at times.

“Just before we went overseas, I went to my best friend’s wedding,” he said. “The first day of combat, he was killed. That was a shock.”

When the war was over, Charles was encouraged to re-enlist, but he decided the Army was no longer for him.

“After being in ground combat and the infantry, it didn’t look like a good career for me,” he said.

Charles attended Rutgers University and earned a bachelor’s in business. He went on to work for the Prudential insurance company. Later, after he was married with kids, Charles went on to open a print shop with his sons and operated in Colorado Springs for many years before deciding to sell.

“As far as my memories are concerned, I think there’s something that no one understands unless they’ve been in it – and that’s facing an enemy in combat,” Charles added.