Posted on November 27, 2019 by Rhonda Wray Leave a comment

By Nathan Gillis
Special to Life After 50

When it comes to formal music education, guitarist Wayne Hammerstadt describes himself as “the world’s worst student.”

However, as a student of music in every other sense, he is clearly quite the opposite. Curiosity and a willingness to learn seem to be at the heart of what he does. His enthusiasm for music of all kinds has made him a well-rounded musician. His skill and versatility have made him a respected figure on the Colorado Springs music scene. And his ability to think outside the box has led to success as a promoter of local events.

His early musical influences include many of the most recognizable names in classic rock. However, it was in exploring those bands’ influences that his own palate was expanded.

“All of the people I listened to were people that opened the door to other things.”

When he was in his early teens, Wayne’s family moved to Europe while his father served in the Air Force. They spent 7 years there, and he describes it as a second home. His experiences broadened his perspective in many ways. Traveling to various countries, he experienced first-hand the different cultures and environments. Inevitably, he found music in many settings. From street performances to bar shows to big name concerts in more formal venues, opportunities were everywhere.

“It was a good time to be living in central Europe,” he says. “There was a lot of great music that came out- a lot of shows to see.” Along with rock and roll, his knowledge and interest in European classical music grew. He fell in love, he says, with the “totality” of music.

Wayne’s focus as a musician has been primarily on guitar. The instrument’s versatility has been key to his development as a player, as well as his options as a performer. He creates original compositions in rock and classical styles, and he has supported numerous other musicians over the years. He plays lead guitar in his own band, Hammerstadt, as well as with Springs veterans the Inman Brothers Band. He also performs solo classical guitar regularly at the Cliff House in Manitou. From tightly structured classical pieces to “anything goes” improvisation, he welcomes the opportunities.

“I love being around music, so I want to stay very active as a player … It’s a blessing to work with a lot of great musicians, and also to be able to noodle around with different styles.”

While the frequent and varied gigs have earned him recognition, it’s his role as an organizer and promoter that has made him an especially valuable asset to the local music scene. He produces and promotes events, and he handles booking for other bands. For the last several summers, he has helped coordinate the University Village Concert Series, Concerts in the Park (Monument), and Lakeside Concerts (Forest Lakes in Monument).

Wayne’s experience with promotion began rather casually and unexpectedly. Years ago, following a gig in a shopping center bar, it occurred to him that the parking lot where he was loading his gear might be a good place for an outdoor gig. Upon contacting the owner, he was told that there was an amphitheater right in the shopping center. Wayne offered to organize three shows (the three bands he was in at the time!), but the owner was interested in even more.

Thus, from what was essentially a fluke, came an opportunity to “rethink the wheel.”

“I started getting involved in some non-traditional models of the way people would present music.” Focusing on shared spaces, as opposed to bars and clubs, would allow musicians to bring the music to the community in new ways.

The insight he gained has helped him be more proactive in creating and promoting music. And in a  music scene of any size, such skills are essential. He acknowledges that business and promotion don’t come naturally to a lot of artists, but encourages engaging in the organization process.

“It’s good to stay close to how it all works- understanding and being involved in all the different aspects.”

He enjoys seeing the Colorado Springs music scene growing, and he believes that it has the potential to be among the best in the country. With several outdoor concert series, the region’s natural beauty can serve as a perfect setting. And with established venues such as Stargazers and newer ones such as Ent Center for the Arts and Boot Barn Hall, the variety of options is only increasing.

“If I can stay in the game,” he says, “I might not have to get a haircut and real job!”

Look for Wayne on Facebook, or in any of his various appearances around town (including a classical Christmas music ensemble performance on Dec. 21st at St. Andrews Church in Manitou). 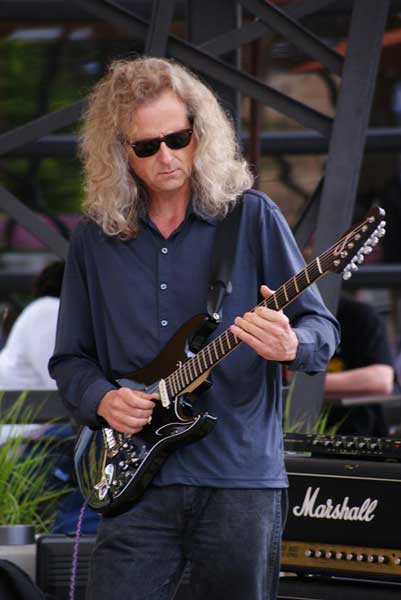